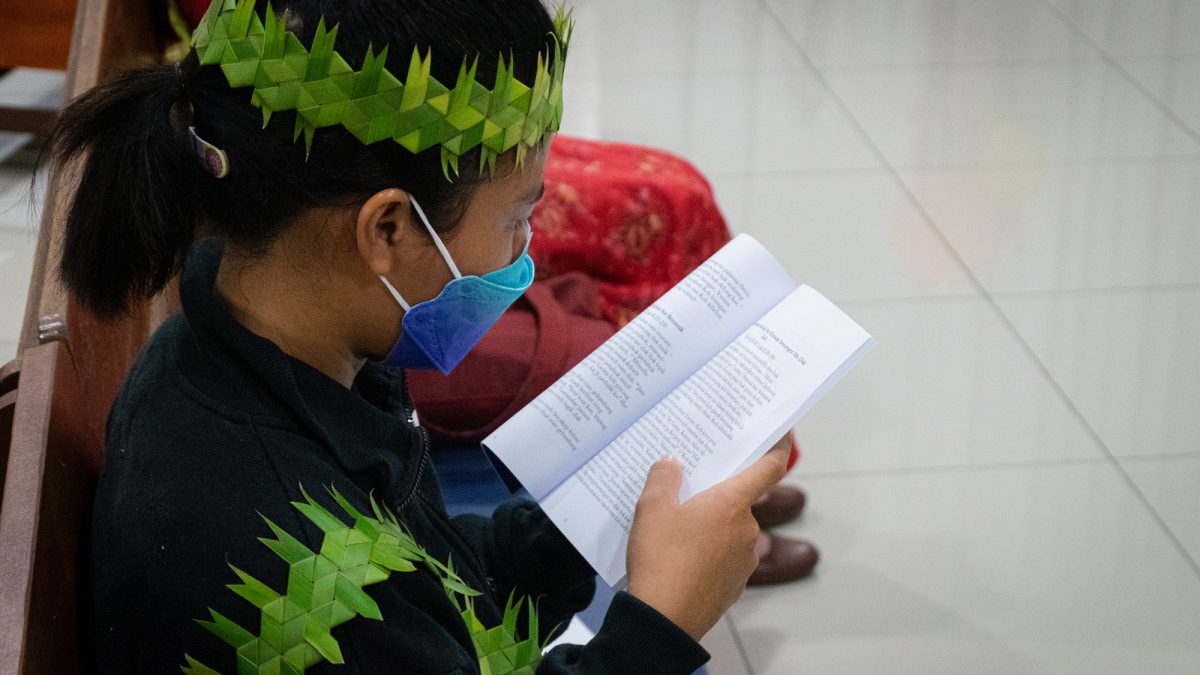 Come and celebrate with us!
We are celebrating the completion of Mark Gospel in Semelai!

So, on the 15th of January 2022, seven of us from Wycliffe travelled to Temerloh to celebrate together with the Semelai brethren and the church at Temerloh Gospel Chapel. We were joined together by members of Bible Society and FCBH (Faith Comes by hearing). For the first time, since ‘Projek Markos’ took off, we were together in the same place. What a precious moment! Though it was just a single book that was completed, but under the circumstances it was started and completed, there is so much to thank the Lord for. It is a historical moment for the Semelai church, a desire fulfilled for some, a new beginning for many! For the first time, the Semelai people heard God’s Word read to them in their own language!

How it all started

Sometime around the middle of 2019, the General Secretary of the Bible Society of Malaysia was in Mentekab to attend to matters concerning the Jahut Bible Translation. Before he left, he met up with some members of Temerloh Gospel Chapel (TGC) and with one of the Semelai speakers. Different ones shared their dreams of a possible translation in Semelai. That day, a vision was birthed corporately in one of the restaurants as they ate a fish meal together! Reverend Mathew came back to KL and contacted us in Wycliffe Malaysia. After much deliberation with Faith Comes By Hearing (FCBH), Temerloh Gospel Chapel (TGC) and Bible Society (BS), it was finally decided that Wycliffe Malaysia would train potential Semelai people in the ‘Basic Principles of Bible Translation’. It would be something new in the making, but as the Lord enabled us, we raced to get the materials for Bible Translation translated into Bahasa Malaysia and to take the participants through the ‘Basics of Bible Translation’ training.

We first met online on 2nd February 2021 for the ‘Basics of Bible Translation’ training. Very often, internet connections were weak and unstable, but we persevered. The Lord sustained the interest of eight participants (six Semelai ladies and two TGC folks) throughout the month of February, and they completed the training successfully.

At the beginning of March 2021, we spent two weeks working on Orthography matters. After looking at the samples of words from several resources and with much testing, we settled with a writing system that facilitates easy reading and writing. We avoided the use of special fonts and diacritics. They marveled at the discovery that the phonology of their own language was quite different from that of the National Language. After a few weeks, they were able to use the writing system efficiently. (There are no diphthongs in the Semelai language and all syllables’ endings are unvoiced. As such, words borrowed from the National Language would be pronounced in a slightly different way and the Semelai people will write these words according to the way they are pronounced in their own language.)

Eventually, four ladies (Mazlina, Ling Ling, Amoy and Masina) agreed to be part of the translation team. They were assigned their duties respectively. Ling Ling was assigned the coordinator of the group. She also played the role as the main exegete and managed all computer matters. The Lord has also gifted her with good hearing and that came in especially useful as we started spelling and writing the language. She was of significant help as we edited the audio version of Mark Gospel. We praised God that TGC gifted the team with a computer so that they could key all their data into the Paratext programme. Mazlina was assistant coordinator, the main editor from the first to the final draft. Amoy has a good command of her native language and played the role as the main translator for first draft of more than half the book of Mark. She diligently applied what she learnt at the translation workshop. Masina bought a new computer on her own to grant help to the translation work. At the start of our training, one member of Wycliffe prayed fervently that God will bring us the right people, at the right time and with the right attitudes. This was truly a spirit-led prayer for the work ahead. Yes, the Lord has brought each one of them together the right giftings too. But all at the right time with the right attitudes! They all sacrificed their time, working late after work. (Two of them were frontliners during the Pandemic.) This was truly the amazing work of God!

A second celebration in conjunction with the launch of Mark in the audio form and the Gospel Film (Mark) in Lumo Video was held on the 19th of February 2022. Over a hundred people attended the ceremony. One person who was there commented, “Wow, it is great, you have the written form, the audio form and also the video form!” Yes, God is great, all these were completed in less than 10 months! Surely, it is evident that the Lord is speeding up the use of media to enable more people access to the word of God. What a joy it was – working together to speed up the work of Bible Translation! As like-minded partners, friends and supporters gathered together, we are again encouraged to persevere in this work. (Three Semelai translators are presently working together to get the book of Luke translated.) After the Audio Launch, they shared that they were really encouraged to press on with their work. Yet another friend commented, “After hearing the testimonies of the translators, I feel we need to garner more prayer support for these translators.” Yes, we will say, translators and a multitude of prayer-partners, and many more, will be needed to complete this work of Bible Translation!

During the Dedication ceremony, the Wycliffe Board chairman said, “We really hope more churches will rise up to take ownership of these projects and to help anchor these translation projects so that the Word of God will be made available to the people in their heart languages.” And one of the best things about this project is that it has been a partnership between like-minded translation organisations, the church, Semelai people, financial supporters and prayer partners. In the words of our Wycliffe Director, “Without them we wouldn’t be able to accomplish this translation project!” Truly our hearts trembled, and we are humbled that He would use us as His instruments!

During the pandemic, many have helped to feed the physically hungry. Yet lurking in the heart, unseen by human eyes – there is a growing void and hunger for the Word of God. It is no wonder that all over the world, we have seen an exponential increase in the use of media to reach areas we could not have access during these challenging times. We now have the written form, the audio form and even the Jesus film to engage the Semelai people with the Word of God. May there be a great spiritual hunger among the Semelai people for God’s Word! May their lives and our communities be transformed by His Word! There is much still to be done!

God speaks Semelai! God’s Word has come to the Semelai people in the language that speaks to their hearts! Together, we echo the words of the Psalmist:

The LORD has done great things for us, and we are filled with joy.

2 min read
Our Stories (Eng), Testimonies from the Field

When Jesus Speaks Through A Dream

2 min read
Testimonies from the Field

An Encounter that led to Faith in Christ

The Challenge of translating the Bible into another language

Nothing Short of A Miracle

STAY CONNECTED WITH OUR WORK

One or more fields have an error. Please check and try again.

Write us a message